In this post I'll provide instructions on how to install the main requirements of a Software Carpentry workshop on a Chromebook. Bash, git, IPython notebook and R.

Switch the Chromebook to Developer mode

ChromeOS is very restrictive on what users can install on the machine. The only way to get around this is to switch to developer mode.

Switching to Developer mode wipes all the data on the local disk and may void warranty, do it at your own risk.

Instructions are available on the ChromeOS wiki, you need to click on your device name and follow instructions. For most devices you need to switch the device off, then hold down ESC and Refresh and poke the Power button, then press Ctrl-D at the Recovery screen (there is no prompt, you have to know to do it). This will wipe the device and activate Developer mode.

Once you reboot and enter your Google credentials, the Chromebook will copy back from Google servers all of your settings.

Now you are in Developer mode, the main feature is that you have a root (superuser) shell you can activate using Ctrl-Alt-T.

The worst issue of Developer mode is that at each boot the system will display a scary screen warning that OS verification is off and asks you if you would like to leave Developer mode. If you either press Ctrl-D or wait 30 seconds, it will boot ChromeOS in Developer mode, if you instead hit the Space, it will wipe everything and switch back to Normal mode.

You can now install Ubuntu using crouton, you can read the instructions on the page, in summary:

Now you can have Ubuntu running in a window of the Chromebook browser by:

What is great about crouton is that it is not like a Virtual Machine, Ubuntu runs at full performance on the same linux kernel of ChromeOS.

You can now follow the instructions for Linux at http://software-carpentry.org/v5/setup.html, summary of commands to run in a terminal:

Anaconda will run under Ubuntu but when you open an IPython notebook, it will automatically open a new tab in the main browser of ChromeOS, not inside the Ubuntu window.

I admit it looks scary, I personally followed this procedure successfully on 2 chromebooks: Samsung Chromebook 1 and Toshiba Chromebook 2.

See a screenshot on my Chromebook with the Ubuntu window on the right with git, nano and IPython notebook running, the IPython notebook window opens in Chrome, see the left window (click to enlarge). 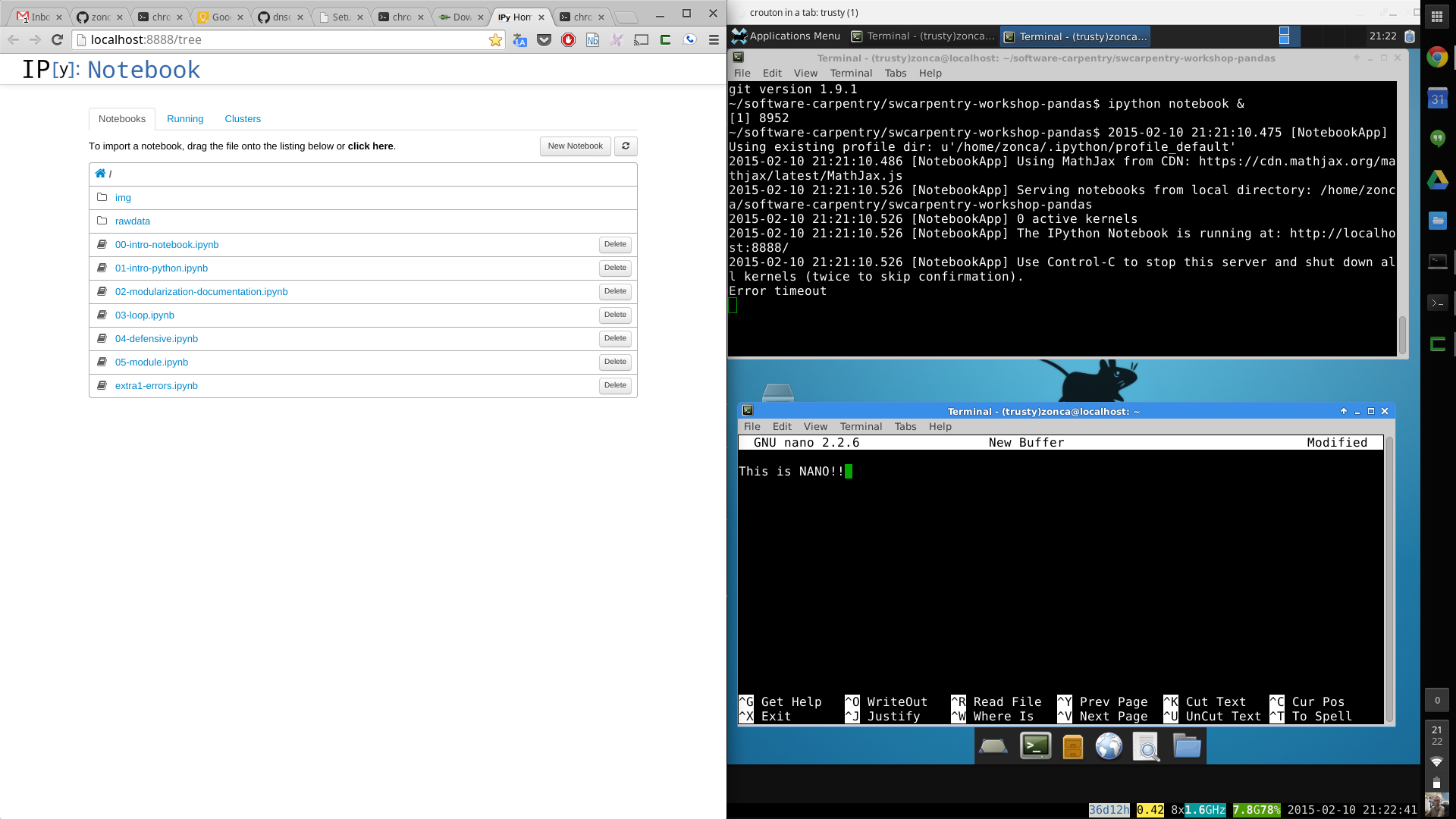 It is also possible to switch the Chromebook to Developer mode and install Anaconda and git directly there, however I think that in order to have a complete platform for scientific computing is a lot better to have all of the packages provided by Ubuntu.